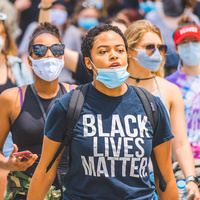 Throughout the United States and in cities across the world thousands have joined protests over the murder of George Floyd by a police officer in Minneapolis, Minnesota. The protests have called for an end to systemic racism and police brutality. Religious leaders have stepped up in solidarity with these calls, using texts from their faith traditions to oppose violence and oppression of black Americans. Many faith communities are beginning to explore how they might get more involved in preventing excessive use of force by police and reforming the criminal justice system.

In this conversation, faith leaders will reflect on how Floyd’s death has influenced their communities. They will be joined by religious scholars to reflect on the ways in which local police departments interact with religious communities, as well as how religious communities might get involved in demilitarizing and training police. The event will build upon a history of faith and criminal justice work and consider what lines of research and practice might prove useful in abolishing the use of excessive force by police.