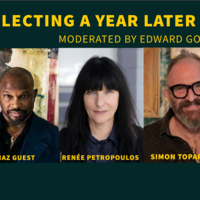 Edward Goldman curator of Art and Hope at the End of the Tunnel will be in conversation with artists Chaz Guest, Renee Petropoulos, and Simon Toparovsky as they reflect together on the pandemic, creating work during this difficult time, and share how the exhibition came along.

Chaz Guest is an American artist who works in the mediums of painting and sculpting. He is described by the Huffington Post as “an American artist of profound inventiveness.” Guest graduated with a Bachelor of Science in Graphic Design from Southern Connecticut State University in 1985. After graduating from S.C.S.U., Guest moved to New York City, where he enrolled in a fashion design curriculum at the Fashion Institute of Technology. In 1986, Guest moved to Paris, France to work as a freelance fashion illustrator. He later joined Joyce Magazine as an illustrator for their magazine covers and was responsible for the illustrations of the JOYCE magazine covers for the 1987/1988 season. After the 1987/1988 season, Guest left Joyce magazine and moved to Dax, France where he started painting. Guest’s first museum exhibit was a group show “Decoding Identity: I Do it for My People” (January 23, 2009 – March 22, 2009) at the Museum of the African Diaspora in San Francisco (MOAD). He's been invited as a 2019 Artist in Residency in the Tohoku region of Japan and has exhibited throughout Los Angels, New York, Paris, and many more.

Renée Petropoulos has created projects and exhibited them internationally. Recently embarking on the project "Among Nations (Mostly)" with a performance "Analogue" (2012) at the MAK, Venice to Venice (2012) as part of the Hammer Museum’s Made in L.A. and “Women in Surrealism” for LACMA (Los Angeles County Museum of Art). "Black Star", begun in 2006, is a performance in Berlin. Her installment of "Prototype for the History of Painting: Eingrouping Social Historical" was installed in MARTE San Salvador, El Salvador. Her film, "Two or Three Things I Know About Gas Station Mini Marts" was screened at Screening, in Philadelphia. The outdoor public sculpture project “Bouquet”(Flower Tower) Between Egypt, India, Iraq, the United States, Brazil, Ethiopia, and Mexico”, situated in Santa Monica, California at a street and pedestrian intersection was completed in spring, 2014. An exhibit of related subject, “Bouquet(Flower Girl) Between Libya, the United States, and Scotland”, was installed at LAMOA in Eagle Rock in May 2014. Petropoulos’ monument drawings were also included in “Forms of the Formless” at Beijing Moca, curated by Marlena Donahue. From the United States to Mexico/ From Mexico to the United States, was presented at Commonwealth and Council, which included a choreographed performance. She exhibited Monument 1 – conjugation, with the Proxy Gallery in Paris in 2016. In 2016, a cd of sound work, Between Libya, the United States, and Scotland, created with composer Greg Lenczycki, was released. Two works were presented in 2016, one with the Isaura String Quartet and reading of sculpture, “Cheek by Jowl”, at Hauser Wirth Schimmel. Her project with a former student, Amanda Katz was released in the summer, 2015 in 7 x 7 (7x7). In Naples Italy, Renée work oned a collaborative project, with Neapolitan scholar, Dr. Denise Spampinato. In 2018, she produced a project in conjunction with the MACO in Oaxaca, Mexico, and in 2019 resided as a guest artist at the Palm Springs Museum.

Simon Toparovsky was born in Philadelphia in 1951. After attending the California College of Arts and Crafts and the University of California, Berkeley, he apprenticed to hand bookbinders in the U.S. and England. In 1976 he was invited to head the new apprenticeship program at the Center for Book Arts in New York. His Tikal Codex was acquired by the Cooper-Hewitt, National Design Museum of the Smithsonian Institution and awarded the special designation “first book as art for the permanent collection.” Toparovsky has focused on narrative sculpture since he moved to Los Angeles in 1981. Working with wax and clay, found objects, manipulated plants and textiles, he has created cast bronze panels, figures, and mixed media compositions which stand alone and are used as elements for site-specific installations. He has been commissioned to create private art gardens, significant icons for the Catholic Church, and large-scale public works. His art has been exhibited internationally and acquired for many collections including the Museum of Modern Art and the Metropolitan Museum of Art, in New York; the Getty Center and the Los Angeles County Museum of Art; Centre Pompidou, Beaubourg and the Bibliothèque Nationale in Paris. Among his awards there have been seven grants from the National Endowment for the Arts, including two Visual Artist Fellowships; two Arts/Industry Residencies at Kohler Company; a year-long artist residency at the Virginia Museum of Fine Art, Richmond; patronage and exhibition sponsorship from the Ministries of Culture of Italy, Russia, France, Lithuania, and the U.S. In 1998, he was awarded the commission to create the life-size bronze crucifix for the main altar of the Cathedral of Our Lady of the Angels, which was consecrated in September 2002.

Born and educated in Russia and formerly employed by the famed Hermitage Museum in St. Petersburg, he offers impassioned views on what he sees in galleries and museums and at cultural events throughout the world, and he is not afraid to “speak truth to power.”

“Art and hope at the end of the Tunnel” is a group exhibition curated by renowned art critic Edward Goldman; featuring dozens of artists who call the Los Angeles area home.