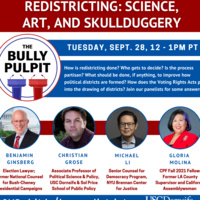 The once-a-decade process of redrawing House of Representatives districts is underway, following the U.S. census results. Texas and Florida will gain more seats while California, New York, and Ohio are expected to lose seats. The shift would mean losing three congressional seats from states that President Joe Biden won in 2020, potentially giving an advantage to Republicans heading into the midterm elections. Republicans need just five seats to take control.

How is redistricting done? Who gets to decide? Is the process partisan? What should be done, if anything, to improve how political districts are formed? How does the Voting Rights Acts play into the drawing of districts?

This event is in partnership with The Village Square and will be broadcast on C-SPAN. The conversation is part of our Bully Pulpit podcast series. When President Theodore Roosevelt coined the phrase bully pulpit, bully meant "wonderful;" and Roosevelt, according to the Oxford Dictionary, was envisioning "an outstanding opportunity to speak out on any issue." Every exchange is guided by standards central to the Center's mission: Respect each other and respect the truth. Opponents are adversaries, not enemies. And if you lose, don't burn down the stadium.

CLICK HERE to watch the video for "Redistricting: Science, Art, and Skullduggery".