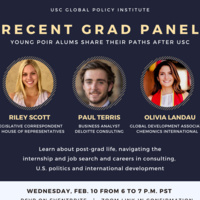 Join the USC Global Policy Institute for an exciting opportunity to network with recent Dept. of Political Science and International Relations graduates.

We're excited to welcome three recent alums, all of whom are GPI alumni, back to USC for a virtual panel! These three alums graduated from USC in 2019, and are currently working in the fields of US politics, government and public affairs consulting and international development.

GPI invites students for a virtual panel on Wednesday, February 10 from 6:00 to 7:00 p.m. PST. The panel invites the alums to share their post-grad experiences and invites current students to ask questions during a Q&A portion at the end.

This is a great way for students to network with recent graduates and to learn about career paths after receiving an international relations degree from USC.

Riley Scott graduated from USC in 2019 with a B.A. in International Relations. At USC, Riley was an All-American and Pac-12 Champion on the Women's Swim Team, as well as a founding member of the GPI. After graduating, Riley moved to Washington D.C. to join Congressman Doug LaMalfa's office as a Legislative Correspondent in the U.S. House of Representatives. She has since been promoted twice and is now the legislative lead for labor, housing, social security, telecommunications, science/space/technology and foreign affairs issues. In D.C., Riley served on the board of the USC D.C. Alumni Club.

Olivia Landau graduated from USC in 2019 with a B.A. in International Relations. At USC, Olivia was involved in GPI, Society 53, Gamma Phi Beta, WYSE and held multiple internships, including one in Cape Town, South Africa and one with the U.S. Senate Committee on Foreign Relations. After graduating, Olivia moved to Washington D.C. to work for the Center for Strategic and International Studies (CSIS), a prominent think tank, as the Middle East Program Coordinator. Now, Olivia is an International Development Practitioner with Chemonics International, a development firm.

Paul Terris graduated from USC in 2019 with a B.A. in International Relations. While at USC, Paul was a fellow at GPI and held multiple internships, including a congressional relations with the Wilson Center, a D.C.-based foreign policy think tank. After graduating, Paul was offered a position as a Business Analyst with Deloitte's Los Angeles office. He now works with Deloitte's Government and Public Services practice