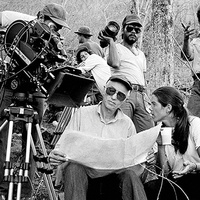 Haskell Wexler at 100: Rebel Citizen and Shoot from the Heart

Haskell Wexler at 100: Rebel Citizen and Shoot from the Heart

DESCRIPTION:
2022 marks the centenary of cinematographer and filmmaker Haskell Wexler. One of the greatest image-makers in Hollywood history, Wexler’s many films as cinematographer include The Best Man, The Thomas Crown Affair, In the Heat of the Night, One Flew Over the Cuckoo’s Nest, Coming Home, and Matewan. He won Academy Awards for his work on Who's Afraid of Virginia Woolf? and Bound for Glory. In honor of Wexler’s 100th year, the USC School of Cinematic Arts will screen two documentaries about him, followed by an illuminating panel.

Directed by Pamela Yates, Rebel Citizen shows the world through Wexler’s eyes as he narrates his evolution as an artist and an activist. It touches on The Bus, filmed with civil rights activists as they traveled the country on their way to the 1963 March on Washington where Dr. Martin Luther King Jr. gave his historic “I Have a Dream” speech, and Medium Cool, where he filmed his actors in the midst of the police riot at the Democratic National Convention in 1968. More than a retrospective of a master’s work, Rebel Citizen asks the audience, “What does it mean to be a patriot?”

Shoot from the Heart is a short film directed by Joan Churchill and Alan Barker, centered around a rollicking evening with Haskell Wexler, D.A. Pennebaker, Chris Hegedus, Nick Doob, and Churchill. Over dinner, they debate about cinematic representation, whether it’s possible to capture reality, how the camera affects a situation, and whether or not there is such a thing as objectivity.

The screenings will be followed by a Q&A about the life, politics, and legacy of Haskell Wexler with his wife and prolific actor Rita Taggart, in conversation with Shoot from the Heart co-directors Churchill and Barker, filmmaker and USC School of Cinematic Arts professor Lisa Leeman, and Michael Renov, Haskell Wexler Endowed Chair in Documentary.

Presented by the USC School of Cinematic Arts and USC Visions & Voices: The Arts and Humanities Initiative.