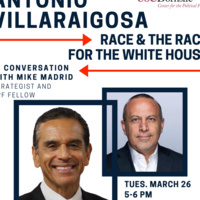 Race & The Race for the White House with Antonio Villaraigosa

Thanks for joining the Center For the Political Future's Spring '19 Fellow Mike Madrid and former Los Angeles Mayor Antonio Villaraigosa for a conversation on race and the race to the White House.

About Antonio Villaraigosa:
Antonio Villaraigosa is a respected voice in American politics and a prominent policymaker with a keen understanding of America’s mainstream and emerging communities. Known for his exceptional skill at building broad bi-partisan coalitions, he draws support from the broad center of progressive Democratic and Republican voters.

Prior to his election as Mayor, Mr. Villaraigosa served as a member of the Los Angeles City Council from 2003 to 2005. From 1994 through 2000, Mr. Villaraigosa served in the California State Assembly as Democratic Whip, Majority Leader and Speaker of the Assembly. He was a member of President Obama’s Transition Economic Advisory Board, the 2012 Chairman of the Democratic National Convention and President of U.S. Conference of Mayors.

Mr. Villaraigosa also has served in academia, as a fellow at Harvard University and a professor in public policy at the University of Southern California. He was also a senior fellow at the Bipartisan Policy Institute in Washington, D.C. Additionally, he has worked in the private sector as a Senior Advisor with Banc of California, served on the McGraw Hill Global Education board of directors.

He serves as Chairman of the Board of Capital Corps and is a Board Member of MedMen.

In November 2018, Mr. Villaraigosa joined the International public affairs firm Mercury as Co-Chair where he focuses on strategic and crisis communication consulting to senior executives in large public and private sector organizations.