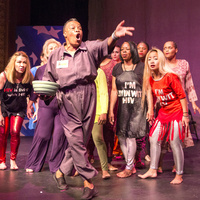 Followed by Q&A with Rhodessa Jones and Company

Part of the Public Humanities and Social Responsibility Series

Since its creation by Rhodessa Jones in the late 1980s, the simple yet profound aim of the Medea Project has been to enable incarcerated women to articulate and perform their experiences of trauma. Even as it has evolved over the decades and expanded into other countries, at its core the process has operated under Jones’ conviction that, in order to approach lasting wellness, women must find a way to tell their stories. Drawing on an array of fictional women’s stories from ancient Greco-Roman and contemporary African and American mythologies, Jones requires the Medea Project participants to develop their own voices in connection to the mythological ones, and then to share those voices in performance.

Nearly 2,500 years ago, the ancient Greek playwright Euripides dramatized the infamous tale of Medea, a woman who murdered her own children to punish their father for betraying her. She radically claimed, “Of all beings that breathe and feel, we women are the most unfortunate,” and so fittingly lends her name to Jones’ powerful and provocative work that sits at the intersections of art, gender, and social justice. Excerpted from "Not Your Mother’s Theater: Rhodessa Jones and the Medea Project" by Alexandra Pappas and Rhodessa Jones.

Organized by the Levan Institute for Humanities and Ethics and co-sponsored by the Department of Classics, USC Society of Fellows, USC Prison Education Project, and the USC Chapter of the Global Women's Narratives Project.