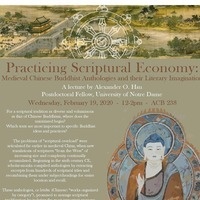 For a scriptural tradition as diverse and voluminous as that of Chinese Buddhism, where does the uninitiated begin?

Which texts are most important to specific Buddhist ideas and practices?

The problems of “scriptural overload” were articulated far earlier in medieval China, when new translations of scriptures “from the West” of increasing size and complexity continually accumulated. Beginning in the sixth century CE, scholar-monks compiled anthologies by extracting excerpts from hundreds of scriptural titles and recombining them under subject-headings for easier location and recall.

These anthologies, or leishu (Chinese: “works organized by category”), promised to manage scriptural proliferation by isolating the most important passages and making them accessible.

Through readings of A Grove of Pearls from the Garden of Dharma (Fayuan zhulin), a late 7th c. Chinese Buddhist anthology, and its predecessors, Dr. Hsu believes scholar-monks adapted the Chinese genre of the leishu to Buddhist ends, emphasizing the manipulability of scripture’s text, the provisionality of its message, and the agency of its readers.