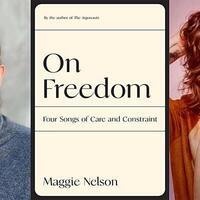 Maggie Nelson is the author of nine books of poetry and prose, many of which have become cult classics defying categorization. She first published Bluets with Wave Books in 2009; in 2015, Bookforum named Bluets one of the top 10 best books of the past 20 years. Her other nonfiction titles include the National Book Critics Circle Award winner The Argonauts (2015), The Art of Cruelty: A Reckoning (2011; a New York Times Notable Book of the Year), The Red Parts: Autobiography of a Trial (2007), and Women, the New York School, and Other True Abstractions (2007). Her poetry titles include Something Bright, Then Holes (2007), and Jane: A Murder (2005). She writes frequently on art, and in 2016 was awarded a MacArthur "genius" Fellowship. She currently lives in Los Angeles.

Grace Lavery is an associate professor of English at University of California, Berkeley. A prominent public intellectual and activist, she has contributed to the Los Angeles Review of Books, Autostraddle, the New Inquiry, Them, the Guardian, Foreign Policy, and Slate. She’s been sober since January 2016 and “full time” as a trans person since March 2018. She lives in Brooklyn, New York. Her forthcoming Please Miss: A Heartbreaking Work of Staggering Penis coming soon from Seal Press in 2022.