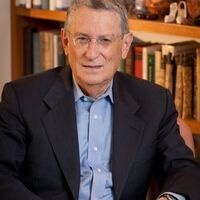 Thank you for joining Stanley Greenberg and Center Director Bob Shrum for the first in our fall '19 Political Conversations series.

Greenberg was inducted into the American Association of Political Consultants' "Hall of Fame." He has been described as "the father of modern polling techniques," "the De Niro of all political consultants," and "an unrivaled international 'guru.'" Esquire Magazine named him one of the most important people of the 21st century. Republican pollster Frank Luntz says, "Stan Greenberg scares the hell out of me. He doesn't just have a finger on the people's pulse; he's got an IV injected into it. He's the best."

He is always on call because his research is relevant, innovative and deep, whether it is exploring the new economy, climate change, the Olympic Movement, new gender roles, political reform, or the hegemonic role of the millennials.

Greenberg and James Carville founded Democracy Corps, the leading organization providing in-depth research and strategic advice to progressive groups, candidates, and leaders. When Karl Rove listed in the Wall Street Journal 10 steps to regain the Republican majority, step one was to create a Democracy Corps of their own.