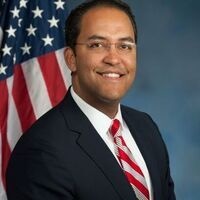 Congressman Hurd is the only black Republican in the U.S. House, representing Texas' 23rd district that spans San Antonio to El Paso. In his three terms, he has made headlines by breaking from his party in supporting universal background checks for gun sales and the LGBT Equality Act, as well as opposing Trump's border wall.

Rep. Hurd served as an undercover officer in the CIA in the Middle East and South Asia for nearly a decade. He was appointed by Speaker Ryan to serve on on the House Permanent Select Intelligence Committee, where he serves as Ranking Member of the Subcommittee on Intelligence Modernization and Readiness. He was also selected by Republican Leader Kevin McCarthy this year to serve on the House Appropriations Committee, where he is a member of the Subcommittees on Military Construction and Veterans Affairs along with Transportation, Housing and Urban Development.

**SPECIAL STUDENT OPPORTUNITY**
Current USC students were invited to an exclusive closed door student forum with Congressman Will Hurd from 2:30 p.m. to 3:30 p.m. at Ground Zero.

See all photos from the event on our Facebook album.

Watch our livestream  of the event.

Listen to our podcast.