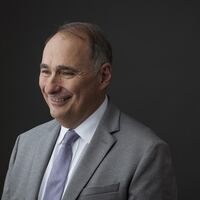 Thanks for joining the Center for the Political Future for the first installment of our Political Conversations series where notable politicians, political operatives and policy experts come to campus to engage in a discussion with Director Bob Shrum. Event is in partnership with the Political Science Department.

David Axelrod is a preeminent American political strategist and commentator and the former chief strategist and senior advisor to President Barack Obama. Axelrod currently serves as the founding director of the University of Chicago's non-partisan Institute of Politics and as a senior political commentator for CNN.  He is the host of The Axe Files, a top-rated podcast featuring in depth conversations with public figures across the political spectrum.  A televised version of the show airs monthly on CNN.  A former political writer for the Chicago Tribune, Axelrod produced media strategy and advertising for 150 campaigns across the U.S., culminating in President Obama’s historic elections.  Axelrod is also the author of The New York Times best-selling memoir, Believer: My Forty Years in Politics.

See all photos at our Facebook album here.
In case you missed it, watch the Facebook Live video here.