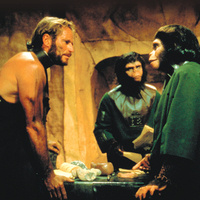 Planet of the Apes 50th Anniversary Screening and Legacy Panel

Planet of the Apes 50th Anniversary Screening and Legacy Panel

DESCRIPTION:
Starring Charlton Heston and Roddy McDowall, Planet of the Apes (1968) is a legendary science fiction masterpiece. Astronaut Taylor and crew crash-land on a distant planet ruled by apes who use a primitive race of humans for experimentation and sport. As Taylor finds himself among the hunted, his life is left in the hands of a benevolent chimpanzee scientist.

We will kick off a semester-long Planet of the Apes retrospective with a 50th anniversary screening of the film followed by a conversation featuring special guests from across the Apes franchise who will share personal stories and discuss the legacy of the film and its enduring impact on popular culture.

Presented by USC Visions and Voices: The Arts and Humanities Initiative. Organized by Organized by the USC School of Cinematic Arts and 20th Century Fox.