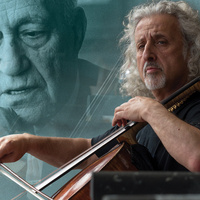 ADMISSION:
A limited number of free tickets will be available for USC students. RSVP beginning Thursday, February 13, at 9 a.m.

The 2020 Piatigorsky International Cello Festival (March 13–22) is the third iteration of this truly unparalleled, 10-day, 42-event festival led by artistic director and USC Thornton strings chair Ralph Kirshbaum. Bringing together masters of the cello and young cellists from around the world, this remarkable celebration of the cello, its music, and musicians will present more than 30 renowned international artists representing 15 countries and four continents.


Bios:
The 2019–20 season marks music director Carl St.Clair’s 30th year leading Pacific Symphony. He is also the artistic leader and principal conductor of the USC Thornton Orchestras. In April 2018, St.Clair led Pacific Symphony in its Carnegie Hall debut, and the orchestra made its national PBS debut in June 2018 on Great Performances with Peter Boyer’s Ellis Island: The Dream of America, conducted by St.Clair. An advocate of music education for all ages, St.Clair has been essential to the Pacific Symphony’s education and community engagement programs.

Mischa Maisky was born in 1948 in Riga, Latvia, and received his first music lessons there at the Children’s Music School and Conservatory. In 1962 he entered the Leningrad Conservatory. In 1965 his debut with the Leningrad Philharmonic earned him the nickname “Rostropovich of the Future.” One year later, he was a prizewinner at the International Tchaikovsky Competition in Moscow and began his studies with Rostropovich at the Moscow Conservatory while pursuing a concert career throughout the former Soviet Union. After being imprisoned in a labor camp near Gorky for 18 months in 1970, he emigrated from the USSR.

USC Thornton Symphony is one of the premier ensembles of the USC Thornton School of Music. Since its inception in the early 1900s, the symphony has been a visible artistic presence in the Los Angeles music community. Currently led by Carl St.Clair, the symphony has worked with some of the world’s greatest conductors, composers, and musicians, including Henryk Górecki, Esa-Pekka Salonen, Yo-Yo Ma, Michael Tilson Thomas, James Conlon, John Williams, and Joan Tower.

Presented by the USC Thornton School of Music and the Los Angeles Philharmonic. Co-sponsored by USC Visions and Voices: The Arts and Humanities Initiative.