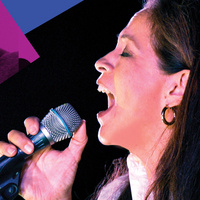 Perla Batalla in the House of Cohen

Performed on Leonard Cohen’s birthday, “Perla Batalla in the House of Cohen” will pay tribute to her friend and mentor with selected songs and rare personal anecdotes. Batalla’s first CD of Cohen covers, Bird on the Wire, was produced with Cohen’s blessing. He attended the recording session, weighed in on the selections and arrangements, and uncharacteristically participated in a photo session at his Los Angeles home to promote the project. Cohen’s passing in November 2016 reaffirmed Batalla’s mission of sharing his lesser-known songs with a younger audience and demonstrating the lighter side of the “Godfather of Gloom.”

Don’t miss Batalla, who has also performed with Nick Cave and Julie Christensen, as she reveals the timelessness of Cohen’s art and shares her sincere respect and deep love for the music, the poetry, and, most of all, her dear friend.

“Batalla tells an engaging story with each song she sings.”—L.A. Times

“Dealing with such issues as race and loss of identity, Batalla has created a musical voyage well worth taking”—Newsday

“This singer has become a perfect example of the new Latina woman in the U.S.—proud of her heritage, perfectly fluid in at least two languages, and an expert in translating cultural traditions from distinct places in the world.”—La Opinion

Bio:
Perla Batalla has recorded seven albums, been featured in films and television, and taken her unique sound on tour to some of the most prestigious venues around the world as well as some of the poorest communities in the United States. The GRAMMY-nominated singer/songwriter’s mission of honoring her roots and exposing young audiences to the beauty of music and the Spanish language has earned her the United Nations’ Earth Charter Award for “extraordinary devotion to social and economic justice” and the Premio Fronterizo Award for “healing work in the world.”

Presented by USC Visions and Voices: The Arts and Humanities Initiative. Co-sponsored by La CASA.

It was good but not great. I did not like too much the music from Cohen