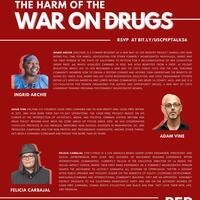 PEP TALKS: Repairing the Harm of the War on Drugs

Join the Dornsife Prison Education Project in a discussion on the war on drugs with three activists on the frontlines of policy and advocacy.

As more and more states legalize and the country as a whole moves toward federal legalization what do we do for those harmed by criminal convictions for marijuana possession? How do we create equitable systems around drug policy moving forward? Please join Ingrid Archie, Adam Vine, and Felicia Carbajal in thinking through these questions and more in our last PEP TALK of the semester.

Ingrid Archie is a former resident of A New Way of Life Reentry Project (ANWOL) and now works full time for ANWOL, advocating for other formerly incarcerated individuals. Ingrid was the first person in the state of California to petition for a reclassification of her conviction under Prop. 64, which legalized cannabis in 2016. She also benefited from a Prop. 47 felony reduction, which led to her becoming A New Way of Life’s public face for the law, teaching community members how to obtain a record change and helping them understand the benefits of doing so. Since 2016, Ingrid has led voter registration, education, and civic engagement efforts within LA’s African American and lower income communities and inside LA County jails. And she is a co-facilitator for Women Organizing for Justice and Opportunity (WOJO), A New Way of Life’s leadership training program for formerly incarcerated women. She is also an integral part of Californians for Safety and Justice’s #TimeDone campaign, which works to end the collateral consequences of having a conviction.

Felicia Carbajal is a Los Angeles-based, queer Latinx organizer, strategist, and social entrepreneur with over two decades of movement building experience within intersectional communities. Currently Felicia is the Executive Director of LA based The Social Impact Center, where their first hand experience as a formerly incarcerated person shapes the movement to actively dismantle all systems of oppression. They’re a sought after public speaker and thought leader on the subjects of equity, economic development, marijuana/cannabis and intersectional community building. They are an appointed Assembly District Delegate to the California Democratic Party and they are also on the advisory boards of Chama Roots Collective and Black and Pink. They love their wife, life, and freedom.

Adam Vine co-founded Cage-Free Cannabis and its non-profit arm, Cage-Free Repair, in 2017, and now runs their day-to-day operations. The Cage-Free project builds on his career at the intersection of advocacy, media, and politics. Criminal justice reform and drug policy reform have been his core areas of focus since 2012. He has coordinated youth-led protests in Los Angeles, mentored high school students in Washington, DC, and produced campaign ads for non-profits and progressive candidates, among other things. He's been a cannabis consumer and patient for more than 20 years.

Tiffiny Townend Blacknell is a native of Los Angeles and a graduate of USC Law School. She worked as a Deputy Public Defender for over 18 years and has handled misdemeanor cases, juvenile adjudications as well as complex serious felonies. Tiffiny is passionate about criminal justice reform and appears regularly in panel discussions surrounding criminal justice issues. In March of 2021, she was hired as the Special Advisor to Los Angeles District Attorney George Gascon. She has been hired to act as a Community and Government Liaison.

Department
Dornsife College of Letters, Arts & Sciences
Add this to your calendar