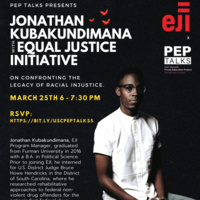 Join the Dornsife Prison Education Project in conversation with the Equal Justice Initiative's Jonathan Kubakundimana on confronting the injustice of racial inequality.

Jonathan Kubakundimana, EJI Program Manager, graduated from Furman University in 2016 with a B.A. in Political Science. Prior to joining EJI, he interned for U.S. District Judge Bruce Howe Hendricks in the District of South Carolina, where here searched rehabilitative approaches to federal non-violent drug offenders for the nation’s first federal drug court. As a survivor of the Genocide Against Tutsis in Rwanda, he has helped lead initiatives in the United States and around the world raising awareness of genocide and other crimes against humanity.