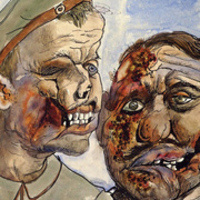 Paths of Glory, Visions of Horror: The Music and Art of World War I

A prelude to the Piatigorsky International Cello Festival in March 2020, USC Thornton will commemorate the 100th anniversary of the signing of the Treaty of Versailles and the formal conclusion of World War I.

USC history professor emeritus Elinor Accampo and Ralph Kirshbaum, Chair of the Strings program and artistic director of the Piatigorsky Festival, will explore the impact on the social fabric and artistic sensibilities of Europe and America.

Visual art, juxtaposed with emotionally laden musical masterpieces featuring the cello by composers who were deeply affected by World War I, will serve as a masterful, beautiful, and cautionary tapestry revealing the wide-ranging human and societal turmoil that arose from this previously unimaginable and brutal military conflict.

The program, featuring performances by some of the brilliant young artists of the USC Thornton, will be followed by a Q&A.

Presented by USC Visions and Voices: The Arts & Humanities Initiative.

Admission is free. RSVP is required. RSVP at https://visionsandvoices.usc.edu/