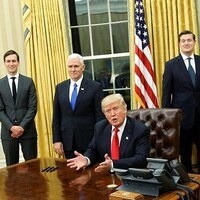 One Year Into the Trump Administration + State of the Union Address

We heard from journalists, academics and an author as they discussed President Trump's first year in office. Then we watched the President's State of the Union Address, followed by expert analysis and questions from the audience.

We were pleased to host the following panelists for our conversation:

James Lacy: A frequent CNN and Fox News commentator who most notably served on the Reagan Administration as a senior executive at the Commerce Department and as General Counsel to the U.S. Consumer Product Safety Commission.

Francis Wilkinson: A U.S. domestic policy expert for the Bloomberg View, who previously served as the executive editor of The Week and a national affairs writer for Rolling Stone.

Lynn Vavreck: An esteemed author and frequent contributor to The New York Times who currently serves as a Professor of Political Science and Communication Studies at UCLA.

Conversation moderated by Jessica Yellin: An acclaimed journalist who served as the Chief White House Correspondent for CNN from 2011 to 2013