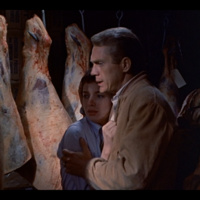 On the Relation Between Beef and Film: If Film Is Meat, then is Digital Film Beyond Meat

This lecture interrogates a forgotten relation between film and beef. Before digitalization, gelatin, mainly extracted out of cattle was an indispensable material for fabricating film.  Beef is not only represented on film, but also forms the substantial basis of its image. Anaylyzing films like Red River (1948), The Blob (1958), and Meat (1976) this presentation shows how beef and film intertwines in historical, mythological, and aesthetic contexts.

Tetsuya Miura is associate professor in the College of Literature, Aoyamagakuin University. His interests are in film theory, French film, Japanese film, and food studies. Miura’s published work reflects these areas and includes four books. Appetizing Cookbooks (2019), On Happy Hour (2018), What Is Cinema?: A History of French Film Theory (2014), and History of the Suspense Film (2012). At present, Miura is publishing a series of essays, “L.A. Food Diary” in the monthly Japanese literary magazine, Gunzo.