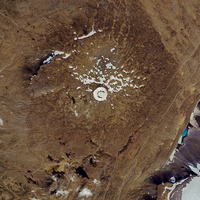 Of Flood and Ice: Hydrological Globalization and the Rise of Water - a guest lecture by Cymene Howe and Dominic Boyer

The melting of glaciers and ice sheets is accelerating, as is thermal expansion of the oceans, and these vectors together virtually guarantee that sea level rise by 2100 will meet or exceed the highest projections of UNFCCC scientists. Rising surface temperatures likewise guarantee new conditions of drought and flood, exacerbated by a slowing jet stream that will tend to stall weather systems in unpredictable ways. Our changing cryospheres and hydrospheres promise misery to millions across the planet. But they also reveal forms of material connectivity that could potentially be mobilized in the struggle against climate change and the petroculture that produced it. In this presentation, we juxtapose Cymene Howe’s research on the loss of glaciers in Iceland with Dominic Boyer’s project on Houston area flood victims’ recovery from Hurricane Harvey to explore a concept we call “hydrological globalization:” the sociomaterial connections and cultural impacts that follow from the redistribution of water across the planet. We discuss in particular how glaciers are being reconceptualized as vulnerable beings and how Houstonians are coming to terms with the more common presence of floodwater. We introduce a new tool from NASA-JPL that allows us to better understand what specific glacial basins are contributing to sea level rise in the world’s coastal cities, allowing for a visualization of hydrological globalization in action. We close with reflections on the researchers’ recent initiative to install a memorial to the first major Icelandic glacier to be lost to climate change, Okjökull.

(Cymene Howe) "My research is concerned with the ways that ecological authority is constituted as well as how anthropogenic climate change calls for new ways of imagining our collective biotic and material futures. I also have a longstanding interest in the overlapping conversations between feminist and queer theory, new materialisms and more-than-human being. Currently, I am researching the social life of ice in the Arctic and, specifically, in the country of Iceland. This project examines the social and political significance of ice, the values associated with it, and the implications of its expiration; it is an inquiry into the social sentiments and consequences of melt and the metamorphosis of ice. In the most basic terms it is a study of cryohmuan relations. Ecologics: Wind and Power in the Anthropocene (forthcoming with the Duke University Press 2019), my second book, is based on a collaborative research project (with Dominic Boyer) in Oaxaca, Mexico and focuses on the political and social contingencies of renewable energy development. Ecologics proposes that while energy transition demands the adoption of less catastrophic fuel sources, equally critical is knowing the ways that humans articulate energetic desires—for light and heat, movement and flourishing—and how these correspond with or disrupt the energetic needs of other biotic life and ecological systems. I spent over a decade working in Nicaragua and my first book, Intimate Activism: The Struggle for Sexual Rights in Postrevolutionary Nicaragua (Duke University Press 2013) analyzes how sexual rights activists reformulated their country's revolutionary history to create new models of sexual subjectivity and rights. Based on my research in Nicaragua I have served as an expert witness for several successful sexual asylum cases in the United States."

Dr. Dominic Boyer is an anthropologist specializing in the study of energy, climate, politics and society. With Prof. Cymene Howe, he recently completed a large NSF-funded field research project on the political culture of wind power development in Southern Mexico. He is currently researching competing models of electricity provision and their social implications in Europe, the United States and Latin America. And with Dr. Mark Vardy he is doing NSF-sponsored field research in Houston with victims of Hurricane Harvey. His previous work concerned the practice of news journalism in Germany and the United States and demonstrated how the rise of new digital information technology combined with the spread of neoliberal policy regimes to profoundly unsettle broadcast-era patterns of newsmaking and news circulation, thus forcing news journalists to reinvent their expertise and authority. Future comparative research, also with Prof. Howe, will focus on the cultural and social dimensions of ice loss and sea level rise across the world.

Before joining the faculty at Rice in 2009, Boyer taught at Cornell University and the University of Chicago. He has held visiting fellowships at the EHESS-Paris, the Goethe Universität Frankfurt and Durham University. Boyer has been the recipient of grants and fellowships from the National Science Foundation, the Alexander von Humboldt Foundation, Fulbright, the Social Science Research Council, and the Wenner-Gren Foundation. In addition to editing the book series, Expertise: Cultures and Technologies of Knowledge (Cornell University Press) and Energy Humanities (Johns Hopkins University Press) and to leading the editorial collective of the journal Cultural Anthropology (2015-2018), Boyer is author of Spirit and System: Media, Intellectuals and the Dialectic in Modern German Intellectual Culture (Chicago UP 2005), Understanding Media: A Popular Philosophy (Prickly Paradigm 2007) and The Life Informatic: Newsmaking in the Digital Era (Cornell UP 2013). His next book will be published with Duke University Press in May 2019. It is titled, Energopolitics: Wind and Power in the Anthropocene.

He has co-hosted and produced CENHS’s Cultures of Energy podcast since 2016. His first film, Not Ok, about the loss of Iceland’s first major glacier to climate change premiered in 2018.