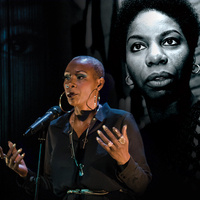 Nina—A Story about Me and Nina Simone

DESCRIPTION:
“When I began the artistic process for Nina—A Story about Me and Nina Simone, I thought that the piece was going to be about my relationship with Nina. I have found that it is much more than that. The production is about our relationship to each other, through the prism of blackness.”—Josette Bushell-Mingo

Josette Bushell-Mingo’s searing and soulful theatrical production inspired by the life and music of legendary artist and activist Nina Simone will make its U.S. premiere at USC. With live musical accompaniment, Bushell-Mingo connects Nina Simone’s political acts as part of the 1960s Civil Rights Movement to struggles in her personal life and persisting inequities in today’s society, questioning how far we’ve really come. Some of Nina Simone’s best-loved songs gain new life in this production directed by Dritëro Kasapi with musical direction by Shapor Bastansiar. The performance will be followed a post-show conversation with Bushell-Mingo and USC professor Anita Dashiell-Sparks.

Nina—A Story about Me and Nina Simone is a co-production between Unity Theatre (UK) and the National Touring Theatre of Sweden and was originally performed at the Unity Theatre  in Liverpool in 2016. After that, it toured Sweden before its London premiere at the Young Vic and Scottish premiere at the Traverse Theatre at the Edinburgh Fringe in 2017. The show toured the UK in spring 2018.

Bios:
Josette Bushell-Mingo OBE is a Swedish-based English theatre actress and director. She was nominated for an Olivier Award in 2000 for Best Actress in a Musical for her role as Rafiki in the London production of The Lion King. In 2001, she founded a black-led arts festival called PUSH at the Young Vic and between 2005-2018 she was the Artistic Director for The Swedish National Touring Theatre’s Tyst Teater——theatre in Swedish sign language. She is currently prefect for the institution for acting at Stockholm’s performing arts university and artistic director for The National Black Theatre of Sweden.

Shapor Bastansiar (musical director/piano) was born in Iran into an artistic family and began to study at Tehran Conservatory of Music at the age of 10, choosing the piano as his main instrument. After receiving his diploma, he began studying musical composition and worked as the stage manager for opera and ballet at Roudaki Hall in Tehran. Since then, he has composed countless pieces in musical styles ranging from classical to pop and folk that have been performed by symphony and philharmonic orchestras around the world, including WDR Symphony Orchestra Cologne, the Oberhausen Symphony, and the Los Angeles Philharmonic, conducted by Bastansiar himself.

Related Events:
From the Personal to the Political to the Stage
Thursday, January 16, 2020, at 7 p.m.
Wong Conference Center, Harris Hall 101
For more info, click here.

Presented by USC Visions and Voices: The Arts and Humanities Initiative. Organized by Brent Blair (Dramatic Arts), Anita Dashiell-Sparks (Dramatic Arts), and Suzanne Lacy (Art and Design) in collaboration with the National Touring Theatre of Sweden, the Embassy of Sweden, and the Barbro Osher Pro Suecia Foundation.