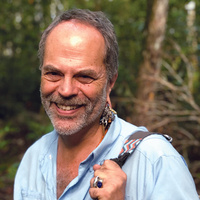 DESCRIPTION:
How can we work together to achieve shared goals in a diverse global society? Disney Imagineer Joe Rohde has four decades of experience making the magical real. He led the creative team that designed the groundbreaking Animal Kingdom theme park in Florida—a process that involved relationship-building with scientists, indigenous communities, and wildlife conservationists—and transformed the Twilight Zone Tower of Terror into Guardians of the Galaxy—Mission: Breakout! at Disney California Adventure. With diagrams and stories that inspire new ways of thinking about education, collaboration, and sustainability, the man the L.A. Times calls “Disney’s philosopher king” will link the real world to idealized worlds, and show how we can get from one to the other. Rohde will illuminate his novel system for teambuilding rooted in storytelling, describing a practical course to increase collaboration and create futures that match our most inspired imaginations.

Joe Rohde started his career as a model designer on Epcot, and has worked on projects at Disneyland, Walt Disney World, Paris Disneyland Resort, and other parks. Rohde was instrumental in establishing the Disney Conservation Fund, which has allocated over $60 million to projects around the world. He has also worked with representatives of the Hawaiian community as part of the creation of the Disney resort Aulani and is one of the creative leads on the French eco-project Les Villages Nature, which seeks to popularize sustainable design and practice through the resort experience. Rohde has spoken on the art of cultivating creative innovation through narrative framing at NASA, the TED conference, and numerous other venues. (Facebook, Instagram, Twitter, Wikipedia)

Presented by USC Visions and Voices: The Arts and Humanities Initiative. Organized by Sasha Anawalt (Communication and Journalism) and Lucy V. Lee (Business). Co-sponsored by the USC School of Architecture.