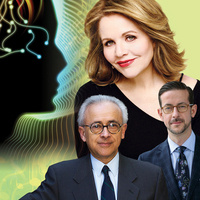 Music as Medicine: Renée Fleming and Antonio Damasio in Conversation

DESCRIPTION:
What if music could help you manage pain or treat anxiety? As it turns out, this is not idle fantasy but something that scientists, doctors, and artists at the cutting edges of their fields are putting into practice. Provost Michael Quick will introduce a forward-thinking discussion with opera star Renée Fleming, neuroscientist Antonio Damasio, and LA Opera CEO and president Christopher Koelsch about the connections between music and the brain—and the very real possibility that music is part of the solution to intractable problems like chronic pain and cancer. The discussion will be interweaved with live musical performances by LA Opera’s Domingo-Colburn-Stein Young Artists. Listen and learn about the role music and other arts can play in tackling the most difficult diseases and improving health and wellness.

The event is presented as part of the Provost’s Series on Wicked Problems, which brings together special guests and USC faculty to discuss the most intractable, multifaceted problems of our time. The series was established by Provost Michael Quick in 2016 out of a belief that universities must take on “wicked problems” through interdisciplinary collaboration, research, and the education of a new generation of leaders and innovators who just might create the solutions the world needs.

Antonio Damasio is University Professor, David Dornsife Professor of Neuroscience, professor of psychology and philosophy, and director of the Brain and Creativity Institute at USC. He has made seminal contributions to the understanding of brain processes underlying emotions, feelings, decision-making, and consciousness. Damasio has received the Grawemeyer Award, the Honda Prize, the Asturias Prize in Science and Technology, and the Nonino, Signoret, and Pessoa Prizes, among many others. His books Descartes’ Error, The Feeling of What Happens, Looking for Spinoza, and Self Comes to Mind are taught in universities worldwide. (TED Talk: “The Quest to Understand Consciousness”, USC profile)

Renée Fleming is one of the most acclaimed singers of our time. In 2013, President Obama awarded her America's highest honor for an artist, the National Medal of Arts. Winner of the 2013 GRAMMY Award (her fourth) for Best Classical Vocal Solo, she has sung for momentous occasions from the Nobel Peace Prize ceremony to the Diamond Jubilee Concert for Queen Elizabeth II at Buckingham Palace. She brought her voice to a vast new audience in 2014, as the first classical artist ever to sing the National Anthem at the Super Bowl. In June, she spearheaded a collaboration between the John F. Kennedy Center for the Performing Arts and the National Institutes of Health called Sound Health: Music and the Mind, focused on the intersections of music, health, and neuroscience. Among her awards are the Fulbright Lifetime Achievement Medal, Germany’s Cross of the Order of Merit, and France’s Chevalier de la Légion d’Honneur. (Facebook, NPR feature, Twitter, Vanity Fair feature, Wikipedia, YouTube)

Christopher Koelsch (moderator) has been the President and CEO of LA Opera since 2012, where he oversees all aspects of artistic planning, including repertoire development, music administration, the casting of artists, and the selection of guest conductors. He is responsible for implementing the artistic vision of General Director Plácido Domingo and Music Director James Conlon. He has overseen the creation of more than 35 new productions, working with each creative team to manage every phase of development from initial conception to opening night. (Twitter)

The Domingo-Colburn-Stein Young Artists are singers and pianists of exceptional talent who are selected for a paid residency with LA Opera as they transition from academic training to a professional opera career. (KUSC profile, LA Opera blog, Los Angeles Times feature)

Presented by USC Visions and Voices: The Arts and Humanities Initiative in partnership with LA Opera. Co-sponsored by the USC Brain and Creativity Institute.