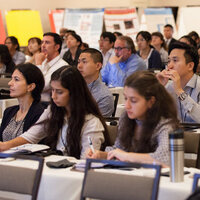 Moving Targets is an annual scientific research symposium in Los Angeles, California. The theme of this year's conference which takes place Friday, August 17, 2018, centers around current breakthroughs in the field of pain medicine, with particular emphasis on combating the opioid crisis.

The goals of Moving Targets are two-fold: 1) the explore future targets for medications with limited addictive potential, and 2) to foster interaction between graduate students and leading scientists, innovators, and policymakers from academia, industry, and government. Attracting a broad audience of nearly 200 attendees, Moving Targets is attended by local and international students, faculty, and professionals from graduate schools, medical schools, and pharmacy schools.

The USC Student Chapter was one of the only four student organizations within AAPS in 1996. While its chapter members have continued to uphold the chapter's reputation for active involvement in speaker programs, social events, and networking, AAPS - USC Student Chapter's main pride lies in the success of its annual "Moving Targets" multidisciplinary symposium.

Free for USC undergraduate, graduate, pharmacy, and medical students and professors. For individuals not affiliated with USC in this manner, the cost is $50 at the door.

Department
School of Pharmacy
Add this to your calendar