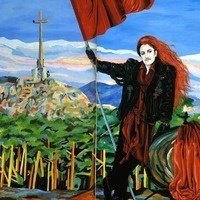 Monument and Memory: The Valley of the Fallen and its Afterimage(s) in Democratic Spain

A Talk by Jacqueline Sheean
Comparative Studies in Literature and Culture, University of Southern California

As a memorial site, the Valley of the Fallen materializes the memory of the Francisco Franco dictatorship and thus stands today at the center of Spain’s national and ongoing memory‐work as it relates to the legacy of the Franco period. This talk examines the place of this contentious monument in Spain’s democracy with a focus on its representations in post‐dictatorship visual media including Lea Levi’s photography series (1975), Costus’ “Valle de los Caídos” painting series (1981‐1986), and Álex de la Iglesia’s film, Balada triste
de trompeta (2010).

Department
Comparative Literature (COLT)
Add this to your calendar