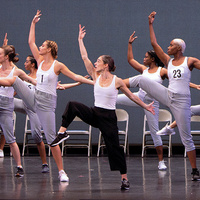 Presenting the life of a dancer through movement, interviews, and stories, each production of Monica Bill Barnes & Company’s The Running Show is as exhilarating and entertaining as it is intimate and unique. Providing an unprecedented look into the life of a dancer as a new kind of sports hero who keeps moving against all odds and recruiting local dancers to join the cast and share their stories, this iteration will feature co-creator, choreographer, and dancer Monica Bill Barnes; co-creator and writer Robbie Saenz de Viteri; and the voices, views, and performances of students from the USC Glorya Kaufman School of Dance. Over a week of rehearsals and development, they will learn their parts from Barnes and be interviewed by Saenz de Viteri to create a one-of-a-kind performance.

Following the acclaimed show, Jackie Kopcsak, Assistant Dean of Faculty at USC Kaufman, will facilitate a conversation with the artists.

Bios:
Monica Bill Barnes founded Monica Bill Barnes & Company in 1997 with a collection of solos that could be performed anywhere. The company has performed in venues ranging from Upright Citizens Brigade to the Sydney Opera House and has been presented in more than 100 cities. Some of the company’s past projects include The Museum Workout, a guided exercise tour of The Metropolitan Museum of Art; Happy Hour, an immersive office-party dance show that ran as a recurring event for three years in New York City; and Three Acts, Two Dancers, One Radio Host, a show that combines radio and dance in collaboration with Ira Glass that toured over 25 cities in America and abroad.

Robbie Saenz de Viteri began working in theater as an audio script assistant to Anna Deavere Smith. He has created performances and toured productions throughout the world with the Obie Award–winning Nature Theater of Oklahoma. He has created, produced, and performed in Happy Hour, The Museum Workout, One Night Only, Days Go By, The Running Show, Keep Moving, and It’s 3:07 Again with Monica Bill Barnes & Company. Some of his other favorite projects include producing This American Life Episode 528, “The Radio Drama Episode,” live on stage at BAM, and directing Rachel Bonds’s Michael & Edie.

Jackie Kopcsak (moderator) is a founding faculty member and Assistant Dean of Faculty of the USC Glorya Kaufman School of Dance. An artist and a scholar, Jackie currently teaches ballet technique, pointe, variations, and repertory as well as dance appreciation, history, and colloquium courses in the academic classroom. She also co-developed USC Kaufman’s first study abroad Maymester and taught the course in Paris for three years (2017-2019). Jackie is an active choreographer and co-director of the interdisciplinary dance company ArtistsPlus Productions.

Presented by USC Visions and Voices and the USC Kaufman School of Dance with support from our media partner, KCRW.