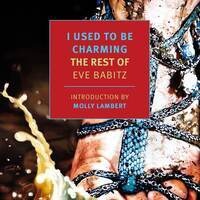 Molly Lambert, Geoff Dyer and Tosh Berman discuss I USED TO BE CHARMING: THE REST OF EVE BABITZ

Join Molly Lambert, Geoff Dyer and Tosh Berman for a discussion on I USED TO BE CHARMING: THE REST OF EVE BABITZ on Wednesday, October 23rd.

Molly Lambert, a former staff writer for Grantland, frequently contributes to the New York Times Magazine. She is a writer from and in Los Angeles.

Geoff Dyer’s many books include the novel Jeff in Venice, Death in Varanasi, But Beautiful (about jazz), Yoga For People Who Can’t Be Bothered To Do It, Zona (about Andrei Tarkovsky’s film Stalker) and Out of Sheer Rage (on D. H. Lawrence). He is a Fellow of the Royal Society of Literature and a member of the American Academy of Arts & Sciences. His books have won numerous prizes and have been translated into twenty-four languages. He is Writer in Residence at the University of Southern California.

Tosh Berman is a writer and publisher and editor for TamTam Books. His memoir TOSH: Growing Up in Wallace Berman's World was recently published by City Lights Books.