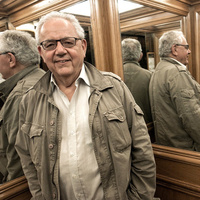 THE MEDIACY OF THE MEDIA:  A PSYCHOANALYTIC APPROACH

The well-known influence of “the media” today is accompanied by an enormous vagueness as to just what the word designates: is it singular or plural? Digital or electronic? New or Old? A means of information or of disinformation? — or both of these alternatives at once? In its relation to “the media,” psychoanalysis has long participated in this uncertainty: it has helped “the media” develop ever more sophisticated means of manipulation; but it can also provide conceptual instruments that offer insight into the process by which that manipulation functions. This talk seeks to explore some of these ambiguities and ambivalences, as well as to interpret some of their consequences.

Samuel Weber studied with Paul de Man and Theodor Adorno, and continues to find the writings of Walter Benjamin, Saussure, Derrida and Lacan, among others, illuminating and thought-provoking. He taught at the Free University of Berlin, Johns Hopkins, the Universities of Minnesota and Massachusetts, and UCLA before joining Northwestern University, where he is an Avalon Foundation Professor of Humanities. In the 1980s he worked as a “dramaturg” on opera and theater productions in. Germany. In 1990 he foundeds the Paris Program in Critical Theory and has directed it ever since.  He has published books on Balzac, Freud, Lacan and Benjamin, and has recently completed one tentatively entitled, “Toward a Politics and Poetics of Singularity,” forthcoming in 2019.

This lecture is part of a series on “Media, Form, and Thought,” generously cosponsored by the USC Dornsife Divisional Vice Dean for the Humanities, Undergraduate Dean, and Graduate Dean, the Departments of Comparative Literature, Latin American and Iberian Culture, American Studies and Ethnicity, English, French and Italian, and Slavic Languages and Literatures, the French and Francophone Research and Resource Center, the German Studies program, the Center for Visual Anthropology, and the School of Cinematic Arts.