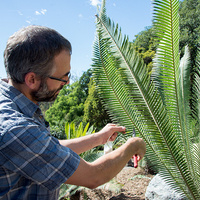 Cycads are the oldest living lineage of seed plants, with a fossil record dating back to the mid-Permian (~270 mya). Low apparent rates of morphological change throughout their history and a peak in diversity during the Mesozoic have led to their characterization as a relict lineage of “living fossils”. However, recent time-calibrated phylogenies have shown that the majority of extant species are of Cenozoic origin and seem to have radiated more or less synchronously.

Extinction and global processes have certainly affected global cycad diversity, but given the regionally restricted distributions of genera, local processes have likely played important roles in recent diversification. Dioon is a genus of ~15 species mostly endemic to the major mountain ranges of Mexico. Its center of diversity is in Oaxaca state and in fact, five species are found around the Tehuacan Valley in northern Oaxaca alone. Along with this close distribution, we have observed relatively restricted habitats, at elevational ecotones, and only subtle morphological differences between taxa. This suggests a recent and/or ongoing radiation in this group even more recent than previous estimates.

Given these factors and the complex topography of southern Mexico, we hypothesized that altitudinal range shifts caused by Pleistocene glacial cycles have isolated populations as they migrated up separate drainages. We test the coincidence of diversification and glacial cycles with a new time-calibrated phylogeny of Dioon.