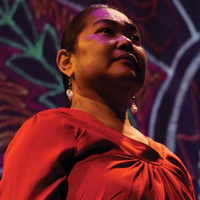 Masters of the Currents: A Conversation with the Creators and Cast

Masters of the Currents: A Conversation with the Creators and Cast

DESCRIPTION:
Created by TeAda Productions, Masters of the Currents is the first nationally touring play about Micronesians in the U.S. Join us for excerpts from the show followed by a conversation with the creators and the multigenerational voices of Micronesians that played a key role in the play’s development.

Inspired by the stories of Micronesians living in Hawai’i, creative partners Leilani Chan and Ova Saopeng used community-based story collection and social justice practices to craft a theatrical journey that takes us from remote island nations to urban cities through ocean water passageways and paved asphalt highways. The play follows the story of three Micronesian youth who have fled their island nations due to environmental and economic pressures, and who must now overcome conflicts of identity to be accepted by their peers in their new home of Hawai'i.

In an engaging conversation, show creators Leilani Chan and Ova Saopeng and cast members Innocenta Sound-Kikku, Emeraldrose Hadik, Jayceleen Ifenuk, and Jermine Kaipat will discuss issues facing the Micronesian community, the development of Masters of the Currents, and the impact the play has had on their lives. The panel will be facilitated by Marie-Reine Velez, Visions and Voices production and marketing specialist and co-founder of the Asian American theatre collective Artists at Play.

TeAda Productions hopes to bring a full, live performance of Masters of the Currents to USC when in-person events can safely return.

Bios:
Leilani Chan (Co-creator, Playwright) is an award-winning performance artist, actor, playwright, director, cultural worker, and founding artistic director of TeAda Productions. Masters of the Currents, which had its continental and inter-island tour premieres in 2018, is her newest collaboration with Ova Saopeng. Chan was awarded the 2019–20 Santa Monica Artist Fellowship and is co-chair of the National Asian American Theater Conference and Festival. Born and raised in Hawai’i, she attended Hampshire College and obtained her MFA from UC Irvine in 2004.

Ova Saopeng (Co-Creator, Actor) is a Los Angeles–based actor and writer, born in Savannakhet, Laos, and raised in Honolulu, Hawai’i. He is an associate producer and teaching artist with TeAda Productions, and co-creator, with Leilani Chan, of the only nationally touring play about the Lao-American experience, Refugee Nation. Saopeng received his BA in theatre from USC and has performed nationally with theatre companies including the Children's Theatre Company in Minneapolis, Mark Taper Forum/P.L.A.Y., East West Players, and hereandnow.