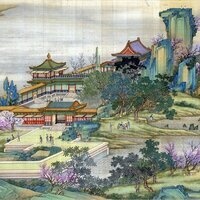 The deadline to RSVP is December 11th. Please note that this event is by invitation only. All participants are expected to read the manuscript ahead of time and actively participate in the workshop which will be held over zoom (the zoom link will be included with the manuscript).

Abstract:
State formation in Korea, Japan, China, and Vietnam occurred a thousand years before it did in Europe, and it occurred for reasons of emulation and learning, not competition. China emerged as a state beginning in the 2nd century BC, Korea and Japan emerged between the 4th and 8th centuries CE, and Vietnam in the 10th century. These countries existed for centuries thereafter with centralized bureaucratic control defined over territory and administrative capacity to tax their populations, field large militaries, and provide extensive public goods. They created these institutions not to wage war or suppress revolt – the longevity of these East Asian dynasties is evidence of both the peacefulness of their neighborhood and its internal stability. For China, state formation evolved as the domestic component of hegemony; a bureaucratic state that was created to manage and organize a vast country. It was emulation of this hegemon that drove the formation and institutionalization of centralized, bureaucratically administered, territorial governments in Korea and Japan and Vietnam, not competition for territory and survival. Why? We focus here on diffusion through emulation and learning: domestic elites engaged with Chinese civilization for reasons of prestige and domestic legitimacy. Our research challenges the universality of the bellicentric thesis of state formation. The willingness to acknowledge the Eurocentric origins of much of IR theory is not new; what is new in our book is the deep empirical evidence we bring to bear that shows this explicitly, and furthermore a positive theoretical advance with a new argument about the causes of state formation.

This workshop is supported by the Laboratory Program for Korean Studies through the Ministry of Education of the Republic of Korea and Korean Studies Promotion Service of the Academy of Korean Studies (AKS-2015-LAB-2250002).