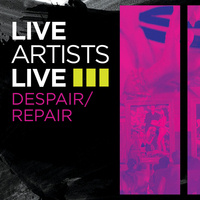 This event will be presented online.

DESCRIPTION:
“Live Artists Live III: Despair/Repair” will showcase performance as a poignant reflection and powerful rebuttal to the world’s challenges, addressing concerns around the “live” body of the artist, structures of feeling/affect, and performance-based action and/or inaction.

Schedule of Events (subject to change):

All times are PT.

Bios:
Danielle Abrams’s performances arise from the social currents that shape her mixed-race and queer identity. Adopting personae that animate the dualistic relationships between racial and ethnic groups, rearranging time periods, and juxtaposing clans, Abrams’s characters build a unique social vision that rewrites the scripts of the past. Abrams has performed and exhibited at the ICA Boston; Detroit Institute of the Arts; Bronx Museum of the Arts; The Jewish Museum, NY; Queens Museum; Grand Central Art Center; and other performance spaces and galleries.

Xavier Cha’s performance-based works and videos grapple with architectures of subjectivity, illusions of agency, and what it means to be human with a physical body in a capitalistic-digital age where we exist as consumer and product. Born in Los Angeles and based in New York, Cha received her BFA from the Rhode Island School of Design and MFA from UCLA, received a New York Foundation for the Arts Fellowship in 2012 and a Frieze Film Commission in 2015, and was awarded a Guggenheim Fellowship in 2014.

Kareem Khubchandani is the Mellon Bridge Assistant Professor in the Department of Drama and Dance and the Program in Women’s, Gender, and Sexuality Studies at Tufts University, teaching at the intersection of performance studies and queer studies. Kareem is also a performance artist, working in drag (as LaWhore Vagistan), storytelling, body art, theatre, and digital media.

Linda Montano has not only performed but has also taught performance art, sculpture, and the history of performance around the world. From 1984 to 1998, she performed 14 Years of Living Art, an exploration of the Hindu Chakra theological system. Her classic video Mitchell’s Death has been shown internationally, and her more than 60 videos (many created with video editor Tobe Carey) are on YouTube. Six books further explore her vision and spiritual-feminist take on life, healing, and art.

Araya Rasdjarmrearnsook was born in Trad, Thailand, in 1957. After earning a BFA and MFA in graphic arts from Silpakorn University, Bangkok, she continued her studies in Germany at the Hochschule für Bildende Künste Braunschweig. Her work has been installed at international institutions including the National Gallery, Bangkok; Tensta Konsthall, Stockholm; Bass Museum of Art, Miami Beach; and Walters Art Museum, Baltimore. In addition to making regular appearances at biennials and group exhibitions internationally, Rasdjarmrearnsook is a lecturer at the Faculty of Fine Arts, Chiang Mai University.

Mary Ellen Storm’s installations and site-specific projects unearth submerged narratives within art, history, and cultural discourse. Her work has been exhibited in museums, galleries, passenger trains, empty retail stores, and horse arenas, and projected onto industrial sites and mountain rock faces. Recent awards include an International Fulbright Scholar Fellowship, a Bogliasco Fellowship to the Liguria Study Center for the Arts and Humanities, the MAP Fund, a Rockefeller Fellowship, Artadia: The Fund for Art and Dialogue, Art Matters, and Creative Capital.

Yan Xing is known for multi-component, interdisciplinary projects that combine diverse media such as performance, video, photography, installation, and painting. Yan Xing has built a complex body of work that reflects critically on how history is manufactured today. Born in Chongqing, he graduated from the oil painting department of the Sichuan Fine Arts Institute and won the Chinese Contemporary Art Award for Best Young Artist in 2012.

Presented by USC Visions and Voices: The Arts and Humanities Initiative. Organized by Patty Chang, Andy Campbell, and the USC Roski School of Art and Design. Co-sponsored by Asian Pacific American Student Services.