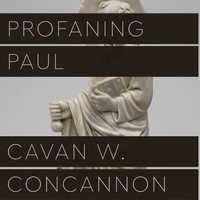 A discussion of Cavan Concannon's recent book, Profaning Paul (University of Chicago Press, 2021). The author will be joined in conversation by Richard Newton (The University of Alabama) and Jorunn Økland (University of Oslo), moderated by Kelsey Moss (USC). Co-Sponsored by the USC Center for the Premodern World.

About the Book: A critical reconsideration of the repeated use of the biblical letters of Paul. The letters of Paul have been used to support and condone a host of evils over the span of more than two millennia: racism, slavery, imperialism, misogyny, and anti-Semitism, to name a few. Despite, or in some cases because of, this history, readers of Paul have felt compelled to reappropriate his letters to fit liberal or radical politics, seeking to set right the evils done in Paul’s name. Starting with the language of excrement, refuse, and waste in Paul’s letters, Profaning Paul looks at how Paul’s “shit” is recycled and reconfigured. It asks why readers, from liberal Christians to academic biblical scholars to political theorists and philosophers, feel compelled to make Paul into a hero, mining his words for wisdom. Following the lead of feminist, queer, and minoritized scholarship, Profaning Paul asks what would happen if we stopped recycling Paul’s writings. By profaning the status of his letters as sacred texts, we might open up new avenues for imagining political figurations to meet our current and coming political, economic, and ecological challenges.

About the Author: Cavan Concannon is Associate Professor of Religion at the University of Southern California. He is the author of Assembling Early Christianity: Trade, Networks, and the Letters of Dionysios of Corinth and “When You Were Gentiles”: Specters of Ethnicity in Roman Corinth and Paul’s Corinthian Correspondence. He is co-director of the Mediterranean Connectivity Initiative and has excavated at Corinth and Ostia Antica.

Open to attendants outside of USC. An excerpt of the book will be made available to registered attendants. Registration before the event is required.

This event is part of the Levan Institute for the Humanities' “Book Chats” series, conversations about new books published by USC scholars in the humanities and humanistic social sciences. To see more events in this series, including recordings of past events, visit https://dornsife.usc.edu/levan-institute/book-chats/.

Department
Center for the Premodern World, Levan Institute for the Humanities
Add this to your calendar