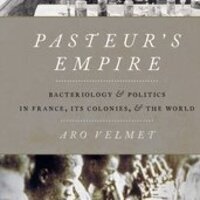 Levan Book Chats: Pasteur's Empire: Bacteriology and Politics in France, Its Colonies, and the World by Aro Velmet

Levan Institute for the Humanities Book Chats—Pasteur's Empire: Bacteriology and Politics in France, Its Colonies, and the World by Aro Velmet

Pasteur's Empire shows how the scientific prestige of the Pasteur Institute came to depend on its colonial laboratories, and how, conversely, the institutes themselves became central to colonial politics. This book argues that decisions as small as the isolation of a particular yeast or the choice of a laboratory animal could have tremendous consequences on the lives of Vietnamese and African subjects, who became the consumers of new vaccines or industrially fermented intoxicants. Simultaneously, global forces, such as the rise of international standards and American competitors pushed Pastorians to their imperial laboratories, where they could conduct studies that researchers in France considered too difficult or controversial.

The author will be joined by Elinor Accampo (USC), JP Daughton (Stanford), and Ruth Rogaski (Vanderbilt).

Aro Velmet is Assistant Professor of History and is a historian of modern Europe, with a particular interest in the intersection of technological change and forms of governance, claims about humanitarian development, and global modeling. He has associated interests in the history of gender and sexuality, as well as the history of modern empires. velmet@usc.edu

In collaboration with the USC Max Kade Institute for Austrian-German-Swiss Studies and Center for Science, Technology and Public Life

Department
Campus Humanities, Levan Institute for the Humanities, Max Kade Institute
Add this to your calendar