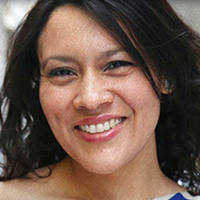 DESCRIPTION:
The LA SKINS FEST has hosted many Native American USC graduates through its labs, festival, and other programs. Presented on Indigenous Peoples’ Day, this panel of writers, actors, directors, and producers will recall their time at USC and experiences with the LA SKINS FEST, and discuss how the entities work together to develop and promote indigenous voices in the arts.

The LA SKINS FEST is a film festival that provides opportunities for Native American filmmakers and offers additional programming to encourage them, including a monthly writers group, monthly directors workshop, and youth multimedia workshops.

Lucas Brown Eyes is an Oglala Lakota from the Pine Ridge Indian Reservation who graduated from USC with a B.A. in Cinema-Television Production. He was accepted into the ABC Disney Writing Program in 2014. Since then, he has sold pilots to Fox and PBS and staffed on over 100 episodes of television for Netflix, Fox, Freeform, Disney, PBS, and, most recently, Duster for HBO Max.

Yelyna Deleon is an award-winning filmmaker, writer, and actor from the South Side of Chicago. She received her MFA in Film and Television Production with a concentration in Writing from USC and her  B.A. in Chicano Studies and Film and Television from UCLA, and teaches at Cal State Los Angele. The NHMC writing fellow graduate and NALIP Televisa/Univision Writing Fellow wrote and produced Murder in the Woods, a slasher movie, and is currently the writer, director, and showrunner for The Train, a sci-fi pilot that is set to premiere later this year.

Miranda Due is a Pawnee/Cherokee game developer from Mvskoke Territory (Tulsa, Oklahoma). Miranda graduated from USC in 2016 with degrees in Interactive Entertainment and International Relations and completed the George Washington University Native American Political Leadership program in 2017. In addition to working on the Call of Duty franchise at AAA games, Miranda is the Inclusion and Impact co-chair of the Women of Cinematic Arts organization, the chair of the International Game Developers Association (Los Angeles Chapter), and a director on the Pawnee Nation Museum board of directors.

Independent writer, producer, and media consultant Sonya Oberly is an enrolled member of the Nez Perce Tribe and a descendant of the Osage and Comanche Tribes in Oklahoma. In 2009, she earned her MFA from USC with an emphasis in writing and directing. Her films have screened at the American Indian Film festival in San Francisco, the Museum of Tolerance in Los Angeles, the First Nations Film Festival in Chicago, the Minneapolis Intermedia Arts Center, and the Agua Caliente Native FilmFest. She is a fellow of the 2018 Native American TV Writers Lab and 2020 Vision Maker Filmmaker Fellowship.

Maddox Pennington (moderator) is a nonbinary writer, professor, and playwright originally from the Cherokee Nation. They received an MFA in Creative Nonfiction from Columbia University, and their debut bibliomemoir, A Girl Walks Into a Book: What the Brontes Taught Me About Life, Love, and Women’s Work was published by Hachette Books in 2017. Prior to teaching writing at USC Dornsife, they performed comedy all over DC, including the DC Drafthouse, Joe’s Movement Emporium, DC LGBTQ Comedy Fest, and almost every Busboys and Poets back room.

Rhiana Yazzie is a 2021 Lanford Wilson and Steinberg award–winning playwright, director, and filmmaker. She is also artistic director of New Native Theatre, which she started in 2009 as a response to the lack of connection and professional opportunities between Twin Cities theaters and the Native community. A Navajo Nation citizen, she has seen her plays on stages from Alaska to Mexico, including Carnegie Hall’s collaboration with the American Indian Community House & Eagle Project.

Presented by the USC School of Cinematic Arts, Outside the Box (Office), Our Voices, USC Visions and Voices: The Arts and Humanities Initiative, and the LA SKINS FEST.