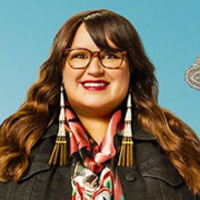 DESCRIPTION:
In conjunction with the 14th annual LA SKINS FEST, this program will showcase a new comedy about two lifelong best friends, Nathan Rutherford (Ed Helms) and Reagan Wells (Jana Schmieding), who find themselves at a crossroads—quite literally—when their sleepy town gets an unexpected wakeup call. Nathan is a descendant of the town’s founder who takes pride in his family’s history, and Reagan a member of the Minishonka Nation, who has dreams of championing her own history. From there, things get wonderfully complicated.

About the panelists:
Tazbah Chavez (Writer) is a performance poet turned director and television writer. She is a citizen of the Bishop Paiute Tribe, from the Nüümü, Diné, and San Carlos Apache tribes.  She has written for the television shows Reservation Dogs and Resident Alien; done work for Nike; and directed Your Name Isn’t English, a film short executive produced by Taika Waititi.

Actor, dancer, choreographer, director, and educator Michael Greyeyes (Cast) is an associate professor in the School of the Arts, Media, Performance, and Design at York University. A proud Nehiyawe (Plains Cree) from Muskeg Lake Cree Nation in Saskatchewan, Greyeyes is a graduate of Canada’s National Ballet School and danced professionally with The National Ballet of Canada and Eliot Feld's New York company. He is the founder of Signal Theatre, a Canadian theatre company that creates intercultural and transdisciplinary performance work.

Sierra Teller Ornelas (Co-Creator, Showrunner, Writer, Executive Producer) is a Navajo and Mexican American creator, writer, producer, showrunner, and comedic force to be reckoned within the industry. She has had a successful writing career as a co-executive producer on NBC’s Superstore as well as a co-executive producer on ABC’s Splitting Up Together. Previously, she was a producer on Brooklyn Nine-Nine for FOX. She was also a co-producer on Selfie for ABC, an executive story editor on FOX’s Surviving Jack and a story editor on Happy Endings for ABC.

Jana Schmieding (Writer, Cast) is making her mark on the entertainment industry as an actor, writer, comedian, and content creator. A Lakota Sioux Native, Jana has been a longtime educator and advocate, raising awareness around Native issues and bringing Native stories to mainstream audiences. In addition to being passionate about Native visibility, she has also been a vocal advocate for social justice issues, namely body justice.

Bobby Wilson (Writer) was born and raised in his ancestral homelands of Minneapolis and St. Paul, Minnesota. In 2009, Wilson met four other young Indigenous artists and founded a sketch comedy troupe called The 1491s. Together they wrote, filmed, and acted in over 100 short comedies and toured the continent. Bobby has also appeared on major media outlets including The Daily Show (Comedy Central), The Moth Radio Hour (NPR), and What We Do In The Shadows (FX).

Kapena Baptista (Moderator) is a composer, ethnomusicologist, and indigenous advocate. After graduating from Harvard in 2016, Kapena was named an inaugural Generation-Indigenous Fellow through the Center for Native American Youth and was awarded a Fulbright Scholarship to study and teach in Lisbon, Portugal. Baptista is an MFA candidate in the Peter Stark Producing Program at the USC School of Cinematic Arts, where he is both a Norman Topping Graduate Fellow and a Shriram Family Graduate Fellow.

Presented by USC Visions and Voices: The Arts and Humanities Initiative, the USC School of Cinematic Arts, and LA SKINS FEST.