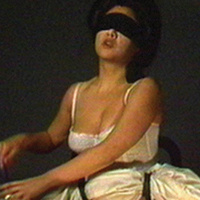 COVID Protocols: Although masks are not required, per the LA County Department of Public Health, it is strongly recommended that attendees wear masks for their own protection and the protection of others.

DESCRIPTION:
Join some of today’s most exciting artists and filmmakers for a critical, surreal, experimental, and beautifully open exploration of LGBTQ+ communities and their allies within AAPI cultures.

Ku’er, a Chinese slang word for “queer” especially popular in Taiwan, plays on the colloquial term “cool kids,” and encapsulates the subversive spirit of this evening of short films, video art, and lively discussion by Chinese and Chinese American artists who illuminate intersectional identities and shatter constrictive norms attached to gender, sexuality, and nation-based identities.

Program (order subject to change):
Kiss of the Rabbit God (Directed by Andrew Thomas Huang, Running Time: 15 min)
Mixing everyday scenes from a restaurant in L.A.’s Chinatown with fantastical imagery, Andrew Thomas Huang tells the story of a young man’s coming out, aided by a mythical Chinese deity who has come to serve as a symbol of LGBTQ pride in Taiwan.

From Its Mouth Came a River of High-end Residential Appliances (Directed by WangShui, Running Time: 13 min)
Breathtaking drone footage shot of a modern tower in Hong Kong corresponds with poetic narration by WangShui, who ruminates on feng shui’s transnational movements and the artist’s own transgender and transcultural identities.

All in My Family (Directed by Hao Wu, Running Time: 39 min)
Recording his heartfelt experience and struggle with creating a modern family in the U.S. and seeking acceptance from his traditional parents and relatives in China, Hao Wu’s short documentary explores issues related to gender and sexuality, morals and familial ties, and reflects cross-cultural interactions and changing attitudes toward LGBTQ individuals and families in China.

Following the screenings, Metropolitan Museum of Art curator Lesley Ma and USC Roski School of Art and Design professor Jenny Lin will lead a panel discussion with the artists and audience.

Bios:
Patty Chang is a Los Angeles–based artist and educator who uses performance, video, installation, and narrative forms to consider identity, gender, transnationalism, colonial legacies, the environment, large-scale infrastructural projects, and impacted subjectivities. She creates surrealist films that have been shown in film festivals around the world, and is a professor of art at USC.

Andrew Thomas Huang is a GRAMMY-nominated music-video director whose collaborators include Bjork, FKA Twigs, and Thom Yorke. His films have been commissioned by and exhibited at the Museum of Modern Art in New York, The Sydney Opera House, and the Museum of Contemporary Art in Los Angeles. Huang graduated with a degree in fine art and animation from USC.

Jenny Lin is an associate professor of critical studies at the USC Roski School of Art and Design. Her research explores relations between twentieth- and twenty-first-century art and design praxes and social phenomena such as urbanization, globalization, and decolonization. She has extensive curatorial and studio experience, having worked at the Museum of Contemporary Art in Los Angeles and with artists and galleries in Shanghai since the early 2000s.

Lesley Ma is the inaugural Ming Chu Hsu and Daniel Xu Associate Curator of Asian Art in the Department of Modern and Contemporary Art at The Metropolitan Museum of Art, New York. From 2013 to 2022, she was founding Curator, Ink Art at M+, Hong Kong and led the museum's acquisition and programming on ink art.

WangShui is a New York–based artist and filmmaker who has exhibited and screened work internationally at venues including the Whitney Museum of American Art, the von ammon co., and the Julia Stoschek Collection, Düsseldorf. WangShui has been featured in Frieze, Hyperallergic, and Interview.

Hao Wu is a writer, director, and documentarian. He directed People’s Republic of Desire, which won the Grand Jury Award for Best Documentary at SXSW in 2018, and 76 Days, which was shortlisted for an Academy Award and won a Primetime Emmy and a Peabody Award in 2021.

Photos: Stills from Kiss of the Rabbit God, Andrew Thomas Huang; From Its Mouth Came a River of High-end Residential Appliances, WangShui; All in My Family, Hao Wu; Shaved (At a Loss), Patty Chang.