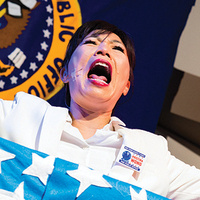 Kristina Wong for Public Office: Live from Her Home!
A Performance by Kristina Wong
A Visions and Voices Signature Event

This event will be livestreamed.

The theme guide for this event is available HERE.

This interactive comedic performance mashes up campaign rallies, church revivals, and solo theatre shows to uncover the history of voting, what it means to run for local office, and the impact artists can have on democracy. Originally built to tour alongside the rallies leading up to the 2020 Presidential election against a charming hand-sewn felt set she sewed herself, this rally is now being broadcast live from her home to yours!

Want a Zoom screenshot with a real-life elected official? This rally will be followed by a candidate “Meet & Greet” with Kristina!

Kristina Wong for Public Office has been supported by a 2019 Center Theater Group Sherwood Award and a 2018 City of Los Angeles Career Artist (COLA) Fellowship.

Bio:
Kristina Wong is a performance artist, comedian, writer, and elected representative who has been presented internationally across North America, the UK, Hong Kong, and Africa. She was featured in the New York Times’ “Off Color Comedy” video series, which highlights “artists of color who use humor to make smart social statements about the sometimes subtle, sometimes obvious ways that race plays out in America today.” Wong has been a late-night-show guest on Comedy Central and FX, and an actor in film and television. Center Theatre Group honored her as the 2019 Sherwood Award recipient for her exceptional contribution to the Los Angeles theatre landscape and her work as an innovative and adventurous artist. In her most blurry performance piece yet, Wong currently serves as the elected Sub-District 5 resident representative for the Wilshire Center Koreatown Neighborhood Council.