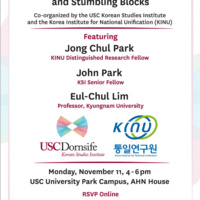 Join the USC Korean Studies Institute and the Korea Institute for National Unification (KINU) for "Korea Relations: Sanctions, Summits and Stumbling Blocks: A Dialogue with the Experts."

Dr. Jong Chul Park is Distinguished Research Fellow of KINU. His research areas include inter-Korean cooperation, a peace regime on the Korean Peninsula, inter-Korean arms control, and security in Northeast Asia. Dr. Park received a Ph.D. in Political Science From Korea University. Currently, he is the Member of Advisory Committee at the Ministry of Unification. Previously, he was Visiting Professor at the University of Tokyo in 2007 and Visiting Fellow at the Japan Institute of International Studies in 2007. Dr. Park served as the Member of Advisory Committee at the National Security Council (NSC) from 2002 to 2006. He was also Visiting Professor of Harvard University from 1997 to 1998. His major publications include A Survey of People's Opinions on South-North Integration: Perception, Factor, Category, and Types (2015), Law and Policy on Korean Unification: Analysis and Implications (2014), and Building Leadership Class in North Korea after Unification (2014).

Dr. John Park is a Senior Fellow at the USC Korean Studies Institute. He is also Director of the Korea Project and an adjunct lecturer at the Harvard Kennedy School. Dr. Park is renowned for his commentary on Asian geopolitical issues, having advised official policy for Northeast Asia. His current research focuses on the North Korean regime’s accumulated learning in evading targeted sanctions.

Dr. Eul-Chul Lim (Professor, Kyungnam University) is Professor and the Director of the ICNK Center at the Institute for Far Eastern Studies, Kyungnam University. He has more than 27 years of experience dealing with North Korean economy and inter-Korean and unification issues as a scholar, a policy adviser. In 2018, with his extensive research background and experiences of over 27 years, he advised the preparatory committee for the inter-Korean summit between President Moon and North Korean leader Kim Jong-un. He now serves as a member of the Policy Advisory Committee for the National Security Council of the Blue House, ROK Ministry of Unification, and the other ministries. He has also written extensively on North Korean issues, in conjunction with policy consultation projects. Prior to joining IFES, Prof. Lim worked as a specialist in the Department of North Korea in the Korea Trade Investment Promotion Agency (KOTRA). He also has studied at the Georgetown University of Washington D.C. as a visiting researcher. He received his B.A. in Trade from Yeungnam University, M.A. in Area Studies from Korea University and finally a Ph.D. in Politics and Diplomacy at Kyungnam University.

The closest USC parking structure for this event is the Royal Structure. Parking is $14.