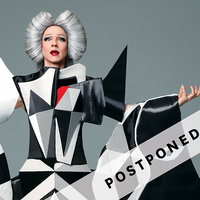 POSTPONED: The Origin of Love performances featuring John Cameron Mitchell and Stephen Trask, originally scheduled for January 21 and 22, have been postponed in the interest of public health and safety. For updates, please join our email list (sign up HERE) or follow us on social media (FB or IG).

DESCRIPTION:
“A punk-rock live Behind the Music episode of sorts and a gift to Hedwig heads everywhere.”–DC Theatre Scene

The smash off-Broadway musical that became a feature film with an ever-devoted cult following and hit Broadway show is now a full glam rock concert experience! Celebrating 20 years of Hedwig and The Angry Inch, double Tony Award–winning, Golden Globe–nominated co-creators John Cameron Mitchell and Stephen Trask will share stories and songs from the groundbreaking rock musical, accompanied by members of the original Tits of Clay Broadway band. The repertoire includes Hedwig favorites “The Origin of Love,” “Sugar Daddy,” and “Wig in a Box,” as well as songs from Mitchell’s musical podcast Anthem and acclaimed album New American Dream.

Presented by USC Visions and Voices: The Arts and Humanities Initiative. Co-sponsored by the USC School of Cinematic Arts, USC School of Dramatic Arts, and USC Thornton School of Music, with support from our media partner, KCRW.

Department
School of Dramatic Arts, Student Affairs, Visions and Voices: The Arts and Humanities Initiative
Add this to your calendar