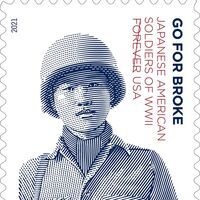 The Go For Broke Japanese American Soldiers of World War II Forever Stamp was issued by the U.S. Postal Service this year to commemorate American men and women of Japanese heritage who served in the military while their families were forcibly incarcerated by the U.S. government. The all-Japanese American 100th/442nd Regimental Combat Team, whose motto was “Go For Broke,” became the most highly-decorated U.S. Army unit fighting against Hitler’s Third Reich. Join us for a reading of a short play that commemorates their courage and that of their families: “Epistles” by internationally acclaimed playwright Velina Hasu Houston and directed by Tamara Ruppart.

You will also be treated to musical excerpts from Portland Jazz Composers Ensemble "Oregon Stories," a musical performance telling the story of a returning vet. For a sneak peek of music, click here.

Wayne Osako
Wayne Osako, 52, of Garden Grove, Calif., who has a number of relatives who enlisted in the US Army during World War II, serves as co-chair of the Stamp Our Story Committee (SOSC), along with founder Fusa Takahashi. Both of his parents were incarcerated as children in the internment camps during the war.

SOSC is the driving force behind the ad hoc community coalition that rallied for the Go For Broke commemorative postage stamp, which was issued this year after 15 years of petitioning by supporters.

As a former middle school history-social science teacher and educational consultant, Wayne found inspiration in sharing about his Japanese American heritage. He worked as a teacher training coordinator at the Go For Broke National Education Center for one year, where he worked alongside the late Chiz Ohira, SOSC co-founder, and her husband, the late 442nd RCT veteran Ted Ohira, both volunteers of the center. Osako began assisting Chiz and co-counder Aiko Ogata King to build nationwide support.

When not volunteering his time on Stamp Our Story, Wayne works in outdoor retail. He is also an independent writer and educational consultant. His wife and fraternal twin daughters, 12, patiently assist him as he has led the stamp movement.

“This cause has been near and dear to my heart — I had to do this,” said Wayne. “The persevering spirit of my elders has fueled me and continues to inspire me."

Tamara Ruppart
Tamara Ruppart has worked as a director, producer and actor in New York and Los Angeles. She worked as crew in television at Mike & Molly (4 seasons/CBS) and Sullivan & Son (3 seasons/TBS). Film/TV directing credits include Rising Sun, Rising Soul (doc), Japanese-language film Path of Dreams (short), and Season 1 of The Kool School (edu). Path of Dreams has won/been nominated for 17 awards worldwide. It won Best Short and the Award of Excellence (Winter Film Awards, NYC), Best Short (LA WIFF), and the Director’s Choice Award (Cinema on the Bayou). Ms. Ruppart is working on two feature films (slated 2022 and 2023), and will mount the L.A. production of Broken Story for the White Horse Theater Company (NYC) in Nov. 2022. She studied Digital Filmmaking at New York Film Academy in Los Angeles, received an MFA in Directing from The New School for Drama, and a BA in Theater from Davidson College.

Velina Hasu Houston
Velina Hasu Houston is an internationally celebrated writer with over twenty-eight commissions in theatre and opera. In New York, US nationwide, and globally in Asia and Europe, her work has been produced to critical acclaim at prestigious theatres. She was the first-ever Playwright-in-Residence at The Pasadena Playhouse, State Theatre of California; and a Fulbright Scholar (Fulbright project, Aoyama Gakuin Daigaku, Tokyo, Japan). Honored by The Kennedy Center, Smithsonian Institution, Rockefeller Foundation, Japan Foundation, Wallace Foundation, Doris Duke Charitable Foundation, Theatre Communications Group, and others, she founded Master of Fine Arts graduate playwriting studies at the University of Southern California in 1990 and co-founded the study of Asian American culture at USC in 1992. At the USC School of Dramatic Arts, she is Distinguished Professor of Dramatic Writing, Director of MFA Dramatic Writing, Head of Undergraduate Playwriting, and Resident Playwright. She also is faculty at the USC Jimmy Iovine and Andre Young Academy. Houston is an Associated Faculty member of the USC Shinso Ito Center for Japanese Religions & Culture; and on the Affiliated Faculties of East Asian Studies and American Studies & Ethnicity. She served on the U.S. Department of State's U.S.-Japan Conference on Cultural and Educational Interchange, Japan-U.S. Friendship Commission, and U.S.-Japan Bridging Foundation for six years. She is the only U.S. playwright to amass a body of work that explores the US-Japan relationship through a bilateral, global view of identity. Her play, Tea, is the most-produced play about the Japanese female experience in the US In Japan, she has been an invited guest at Aoyama Gakuin Daigaku, Osaka University, Kyoto University, Keio University, and Doshisha University. Five documentary films in Japan have featured her work and family. Her archives are with The Library of Congress, Washington, D.C.; and The Huntington Library, San Marino, California.  Her blog, Matchabook, is at http://www.matchabook.wordpress.com, and explores culture related to ethnicity as well as female theatre- and film-makers. She is married to Peter H. Jones of Manchester, England; and has two children, Kiyoshi and Leilani. Her pets include two Shiba Inu, Kentaro and Kojiro, and two domestic shorthair cats, Hanako and Stella.

Register for the webinar by clicking here.