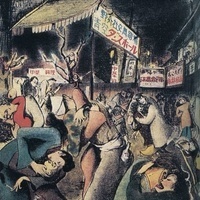 POSTPONED Japan in the Long 1940s: A New History

While there have been many studies and conferences on colonial, wartime, and postwar Japan, there has been much less attention paid to the connections between the era of total war and military occupation during the 1940s which ultimately shaped how we remember and write about the empire, the war, and contemporary Japan.

This workshop will showcase new, cutting-edge projects that unite the histories of wartime (1937-1945) and occupied Japan (1945-1952). Participants aim to demonstrate the possibilities of thinking about an integrated history of war and defeat in the Japanese context, and stimulate new research directions for both Japanese studies and the global history of war mobilization and military occupation in the twentieth century. Furthermore, we hope to use the workshop as a vehicle for exploring and sharing new methodologies and sources in the writing of modern Japanese history.