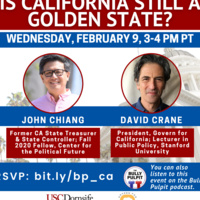 Is California Still a Golden State?

California is often praised as the "Golden State" with beautiful weather, a world-leading economy, top tier universities and corporations, and a rich, diverse culture. Yet many are leaving California for states with lower taxes, tougher crime enforcement, affordable housing, and less liberal policies. Has California become the poster child for income disparity where Silicon Valley billionaires co-exist with the nation's largest homeless population? Or have California's progressive politics, natural resources, and other factors proved that it will remain a prosperous and sustainable state for generations?

This discussion is in partnership with Govern for California.

CLICK HERE to watch the full video for "Is California Still a Golden State?"