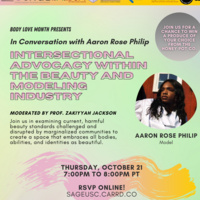 In Conversation with Aaron Rose Philip: Intersectional Advocacy Within the Beauty and Modeling Industry

Join SAGE for our first speaker event in our Body Love Month Initiative of Fall 2021 as we host a virtual speaker event with model Aaron Rose Philip. During this event, Aaron Rose will be discussing her time within the modeling industry through the lens of her intersecting identities as a Black, trans, disabled model. Through this moderated discussion led by Professor Zakiyyah Jackson, of the Center for Feminist Research and English Department, we will examine current, harmful beauty standards challenged and disrupted by people like Aaron Rose and create a space that embraces all bodies, abilities, and identities as beautiful.

This event is Co-Sponsored by the following Organizations and Departments:

Aaron Rose Philip is an Antiguan-American model. She s the first Black, transgender and disabled model to be represented by a major agency. Aaron Rose Philip refuses to be defined. Hailing from The Bronx by way of the Caribbean nation of Antigua and Barbuda, Aaron was discovered through her social media where she took notice of the lack of representation of trans women of color within the fashion industry, let alone anyone with a disability. Represented by Community New York, she has emerged as a trail-blazer, determined to represent her communities as a model.

Zakiyyah Iman Jackson is Associate Professor of English and Director of the Center for Feminist Research at the University of Southern California. Professor Jackson is the author of Becoming Human: Matter and Meaning in an Antiblack World: winner of the Harry Levin First Book Prize from the American Comparative Literature Association, the Gloria Anzaldúa Book Award from the National Women’s Studies Association, and Lambda Literary Award for LGBTQ Studies. Her research explores the literary and figurative aspects of Western philosophical and scientific discourse and investigates the engagement of African diasporic literature, film, and visual art with the historical concerns, knowledge claims, and rhetoric of Western science and philosophy. Professor Jackson is at work on a second book, tentatively titled “Obscure Light: Blackness and the Derangement of Sex-Gender.” The project provides a critique of biocentrism (or biological reductionism and determinism) and elucidates the indistinction of sex-gender and race. It argues that antiblackness constitutes the bedrock of modern Western logics of sex-gender, in science and philosophy, and meditates on the transfiguring potentialities of blackness. Jackson’s work has appeared in Feminist Studies, e-flux, Gay and Lesbian Quarterly, Qui Parle: Critical Humanities and Social Sciences, South Atlantic Quarterly, and Catalyst: Feminism, Theory, and Technoscience. She has work forthcoming in Diacritics and Síntesis: Revista de Filosofía. Her articles can be found on her website: zakiyyahimanjackson.com

SAGE is partnering with Fytist for Body Love Month Fall 2021! Use our code SAGE25 for 25% off any products on their site now until October 31. You can also join SAGE at our Body Love Fair on October 18 for a chance to win a $15 cash off coupon code for Fytist will supplies last. NOTE: The 25% off discount code and the $15 cash off code must be used separately