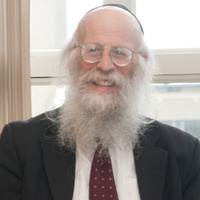 In this lecture, Alan Rosen considers the special manner of witness found in Holocaust-era calendars composed in ghettos, in camps, and in hiding. The marking of fast days and festivals tell a remarkable story; the form, organization, and languages of the calendars convey a related one. And as with testimony in general, what is omitted—a date or a month, a name or a script—speaks volumes. At times, moreover, such calendars served as vehicles for sacred writings, images and symbols as well as for camouflaged defiance. The lecture is based on his recent book The Holocaust’s Jewish Calendars: Keeping Time Sacred, Making Time Holy.

Dr. Avraham (Alan) Rosen, author or editor of fourteen books, writes and teaches on Holocaust literature, testimony, history and topics of traditional Jewish concern. He is most recently the author of The Holocaust’s Jewish Calendars: Keeping Time Sacred, Making Time Holy (Bloomington: Indiana UP, 2019), awarded the 2020 Yad Vashem International Book Prize for Holocaust Research. He is the editor of Elie Wiesel: Jewish, Literary, and Moral Perspectives (Indiana UP, 2013, finalist, National Jewish Book Awards) and Literature of the Holocaust (Cambridge UP, 2013, also a finalist, National Jewish Book Award). His current writing, including two books and a number of articles, focuses largely on the legacy of his teacher and mentor, Elie Wiesel. Dr. Rosen has taught at universities and colleges, yeshivas and seminaries in Israel and the United States, and lectures regularly on Holocaust Literature and Testimony at Yad Vashem’s International School for Holocaust Studies and other Holocaust study centers. In Fall, 2017, he was awarded the “Susan Herman Award for Leadership in Holocaust and Genocide Awareness” from Kean State University. Born and raised in Los Angeles, educated in Boston under the direction of Elie Wiesel, he lives in Jerusalem with his wife, children, and grandchildren.