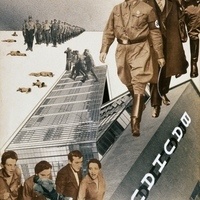 The Bauhaus (1919–1933) is widely regarded as the
twentieth century’s most influential art, architecture, and
design school, celebrated as the archetypal movement of
rational modernism and famous for bringing functional and
elegant design to the masses. In this talk, art historian
Elizabeth Otto delves into the previously unexplored
question of sexuality and gender fluidity at the Bauhaus. She
focuses on the school’s female members and Bauhäusler who
queered the school’s aesthetics in order to disrupt gender
conventions, represent gay and lesbian subjectivities, and
picture same-sex desire—moves that were not without risk
during the Weimar Republic, a regime that criminalized
homosexuality. And, while the Bauhaus is often cast as
neutral and apolitical, Otto examines its members’ embrace
of radical politics on both the left and the right—during the
school’s Communist period, when some of the Bauhäusler
put their skills to work for the revolution, and, later into the
service of the Nazis. This talk disrupts the narrative of a
normative Bauhaus to yield a richer history that only
emerges when we look at a new range of Bauhaus works and
artists, and reconsider the questions that we ask of them.

Register in advance for this meeting:

Department
Max Kade Institute
Add this to your calendar