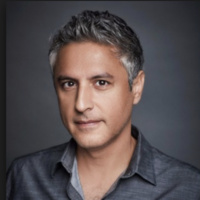 An Evening with Reza Aslan in conversation with Dean Varun Soni
about his new book, God: A Human History

Book signing to follow. Short clips from BELIEVER will also be screened.

James Joyce Award winner Reza Aslan is an internationally renowned religions scholar and writer whose books include the #1 New York Times Bestseller, Zealot: The Life and Times of Jesus of Nazareth, and the International Bestseller, No god but God: The Origins, Evolution, and Future of Islam. Aslan teaches creative writing at the University of California, Riverside. His writing has been published in The New York Times, Slate, The Daily Beast, The Christian Science Monitor and The Washington Post, and he makes frequent appearances on TV and radio shows as a religions and political analyst. He served as an Executive Producer for ABC’s Of Kings and Prophets, a Consulting Producer for HBO’s The Leftovers, as well as host and executive producer for both Rough Draft with Reza Aslan (premiered on OvationTV) and CNN’s original series, Believer. His newest book,  God: A Human History, was released in November, 2017.

Department
Office of Religious Life
Add this to your calendar