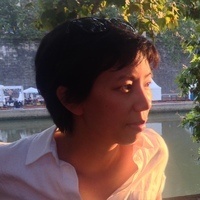 This is a past event.
Virtual Event
The Consortium for Gender, Sexuality, Race and Popular Culture and the School of Cinematic Arts invite you to a book talk with Genevieve Yue (Eugene Lang College), author of "Girl Head: Feminism and Film Materiality."

"Girl Head” (Fordham University Press) explores how gender and sexual difference have been deeply embedded within film materiality. In rich archival and technical detail, Yue examines three sites of technical film production: the film laboratory, editing practices and the film archive. Within each site, she locates a common motif, the vanishing female body, which is transformed into material to be used in the making of a film. The book develops a theory of gender and film materiality through readings of narrative film, early cinema, experimental film and moving image art. After a brief response from Sarah Kessler (USC), an audience Q&A will follow. Genevieve Yue is Assistant Professor of Culture and Media and Director of Screen Studies at Eugene Lang College, The New School. She is a member of the board of trustees for the Flaherty Film Seminar. Her writing has appeared in October, Grey Room, Film Quarterly, and Film Comment. Yue received her PhD in Critical Studies from USC’s School of Cinematic Arts in 2012. Sarah Kessler is Assistant Professor of English at USC. She writes about popular media and culture and her current book projects explore the politics of voice and ventriloquism and binge-watching as praxis.