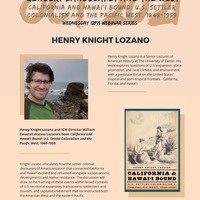 Gender, Landscape, and the West: Henry Knight Lozano on California and Hawai'i Bound: U.S. Settler Colonialism and the Pacific West, 1848-1959

Knight Lozano articulates how the settler colonial discourses of Americanization that connected California and Hawai‘i evolved and refracted alongside socioeconomic developments and Native resistance. The discussion will draw on his framing of these events within broad contexts of U.S. territorial expansion, transoceanic settlement and tourism, and capitalist investment that reconstructed both the American West and the eastern Pacific.

Go to https://bit.ly/hlozano to register for the webinar.